Rick Dyer has been rock climbing ever since being introduced to it at summer camp as a teen. As he got older his and his friends’ love for climbing got stronger and they continued to climb more and do more advanced adventures. As their skills continued to grow they realized their love for traditional climbing “where you place your own protection on the rock as you climb up”. In addition, they also started doing some mountaineering. Nowadays Rick tries to go climbing or mountaineering about 8-10 weekends a year.

When he is not climbing he enjoys doing other activities like mountain biking and running and going to the gym so that he can stay fit for when he does climb. One of Rick’s favorite places to climb is Smith Rock State Park in central Oregon, as well as places the Columbia River George. “I’ve summited many of the mountains in the northwest, including Mt. Hood, Mt. Adams, Mt. Rainier, Mt. St. Helens, and many other less famous ones. We just recently moved to southern Utah and I’m excited to explore the rock climbing areas around there”. Rick is very passionate  about  climbing  but he especially loves being able to climb with his kids. “I love climbing with my kids and have some great memories from when they were very small strapping them into a chest harness and watching them climb”. 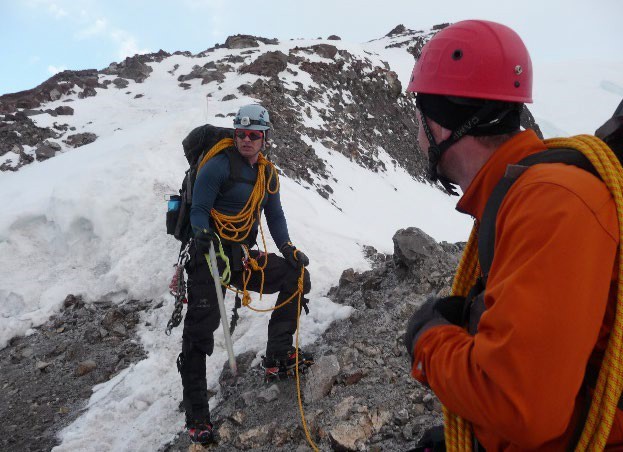 One of Rick’s favorite climbing memories is climbing a tower in central Oregon called “Monkey Face”, which he has climbed multiple times. The thing he loves about this climb is that it is not a regular climb, it is a “multi-pitch” climb meaning it takes multiple ropes to be able to reach the top. This aspect of needing one person to build an anchor and then belay the second climber from a higher point makes this climb especially fun. In addition, Monkey Face is so tall that the decent of the climb is mostly just “free”, so one is just hanging rather than actually pushing off the rock.

The pictures included are of Monkey Face and Rick and his son after climbing it, and him climbing Mt. Rainier.